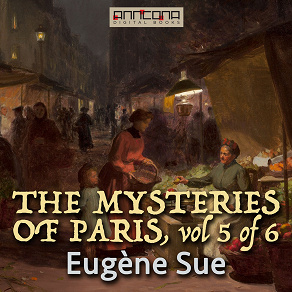 The Mysteries of Paris vol 5(6)

The Mysteries of Paris – volume 5 of 6. A novel in six parts by the French writer Eugène Sue.

The hero of the novel is the mysterious and distinguished Rodolphe, who is really the Grand Duke of Gérolstein (a fictional country) but is disguised as a Parisian worker. Rodolphe can speak in argot (the secret language of criminals), is extremely strong and a good fighter. Yet he also shows great compassion for the lower classes, good judgment, and a brilliant mind. He can navigate all layers of society in order to understand their problems, and to understand how the different social classes are linked.

The novel is released as audiobook in 6 volumes, of which this is volume 5. Reading by Celine Major, total running time (TRT): 8 hours, 41 min. Also available as e-book (ePUB).

Marie-Joseph "Eugène" Sue (1804-1857) was a French novelist. He was one of several authors who popularized the genre of the serial novel in France with his very popular and widely imitated The Mysteries of Paris, which was published in a newspaper from 1842 to 1843.