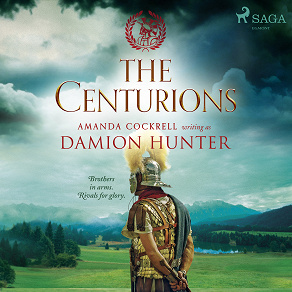 by Damion Hunter
Against the mighty splendour of the glorious Roman Empire, unfolds the magnificent new saga, perfect for fans of Conn Iggulden.

Correus and Flavius. Half-brothers, sons of a brilliant general. One, son of a slave woman, is a born warrior destined to excel. The other, a nobleman by birth, must struggle relentlessly to succeed.

When they both join the Centuriate, a position Flavius has always known he will inherit, and one that Correus has long coveted, it is together that they face the brutal reality of war. Fighting German barbarians will prove dangerous, not only to their bodies but to their souls as well...

The Centurions, book one in this epic Roman adventure trilogy, is perfect for Simon Scarrow and Ben Kane's fans.

Damion Hunter is a pseudonym of Amanda Cockrell. Along with the Centurions Trilogy, she is also the author of Pomegranate Seed, What We Keep Is Not Always What Will Stay, the historical trilogies The Deer Dancers and The Horse Catchers, and The Legions of the Mist, a Roman historical adventure novel. She lives in Roanoke, Virginia.
Listen to sample
Log in to borrow