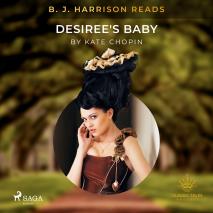 by Kate Chopin
Kate Chopin’s short story "Desirée’s Baby" depicts a love story that is far from simple. Desirée was found as a baby by a wealthy French Creole couple, Monsieur and Madame Valmondé, in Louisiana before the American Civil War. She marries Armand, the son of another wealthy French Creole family, and has a son with him. Yet a happy event takes a scandalous turn when upon the child’s birth, the parents note that the child carries African blood in him. Whilst this short story is about social class, it also contains fairytale-like elements and even Gothic tones. Discover the story as read by the uncanny B.J. Harrison.

Kate Chopin (1850-1904), born Katherine O’Flaherty, was an American writer of novels and short stories mostly set in the 19th-century American South. Her works deals with themes of the female psyche and women's limited life opportunities in the Victorian era, often in a naturalist style. She was considered controversial in her time, but is now praised as a pioneer of 20th-century feminist, American literature. Her most famous works include the novel 'The Awakening' (1899), which explores themes of rebellion against femininity and motherhood at the turn of the 20th century.