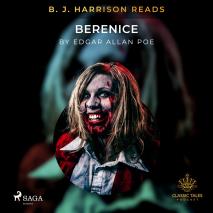 by Edgar Allan Poe
Egaeus is a man who can get lost in matters with 'nervous intensity of interest'. He is about to marry his cousin Berenice, whose health is deteriorating until the only part the disease has not touched are her teeth. It is those teeth, which fill Egaeus' mind and continue to haunt him to a terrifying degree. 'Berenice' by Edgar Allan Poe dates back to the 19th century and was considered shocking upon its publication. The horror short story has been adapted onto film, including the 1954 short film Bérénice.

Edgar Allan Poe (1809-1849) was an American writer, poet, editor and literary critic. He is considered a pioneer in the genres of detective fiction, the macabre and science fiction. His numerous short stories include the likes of 'The Purloined Letter', and 'The Raven' is one of his best-known poems. Edgar Allan Poe's works have been captured throughout popular culture, including films, such as Histoires extraordinaires from 1968, based on Poe's stories and directed by Federico Fellini.