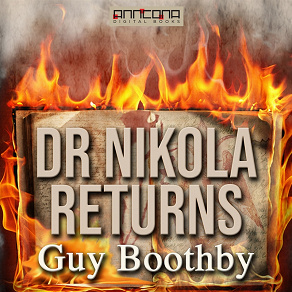 Dr Nikola Returns is the second of Guy Boothby’s novels about the mysterious Dr Nikola, an occultist anti-hero seeking immortality and world domination.

Guy Boothby’s character Doctor Antonio Nikola was one of the first great diabolical criminal masterminds. He was a Victorian forerunner to Fu Manchu and a sometime literary rival to Sherlock Holmes. He was ruthless in his pursuit of his objectives which range from world domination to cheating death. Irrespective of his villainy and moral turpitude he was bound by a self-imposed code of chivalry, He was generous in both victory and defeat which made him a character you want to like rather than hate.

In this novel (a follow on from the first novel, Doctor Nikola's Revenge) adventurer Wilfred Bruce and Doctor Nikola set off for Tibet in search of a secret Chinese monastic society "ten times as powerful as any government or priesthood in the world." Its members can extend life, perform magic, and raise the dead.

Using his talent for disguise, Dr Nikola plans to penetrate the forbidden citadel and learn its hidden mysteries. With these miracles at his command, Nikola knows he can change the world but as with all great adventures, things do not always go according to plan!