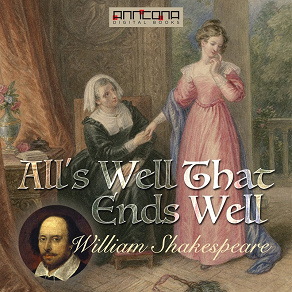 All's Well That Ends Well is a play by William Shakespeare. It is believed to have been written between 1604 and 1605, and was originally published in the First Folio in 1623.

In All's Well That Ends Well, a woman is given in marriage to the man she longs for, but, because she is of lower rank, he refuses to accept the marriage. It becomes her challenge to win his acceptance.

There is no evidence that All's Well That Ends Well was popular in Shakespeare's own lifetime and it has remained one of his lesser-known plays ever since, in part due to its odd mixture of fairy tale logic, gender role reversals and cynical realism.

Though originally the play was classified as one of Shakespeare's comedies, the play is now considered by some critics to be one of his problem plays, so named because they cannot be neatly classified as tragedy or comedy.

William Shakespeare (1564-1616) was an English poet, playwright and actor, widely regarded as the greatest writer in the English language and the world's pre-eminent dramatist. His extant works, including some collaborations, consist of about 38 plays, 154 sonnets, two long narrative poems, and a few other verses. His plays have been translated into every major living language and are performed more often than those of any other playwright.

Shakespeare was a respected poet and playwright in his own day, but his reputation did not rise to its present heights until the 19th century. His plays remain highly popular today and are constantly studied, performed, and reinterpreted in diverse cultural and political contexts throughout the world. In 2016, celebrations and festivals in the United Kingdom and across the world honoured The Bard's 400th anniversary.