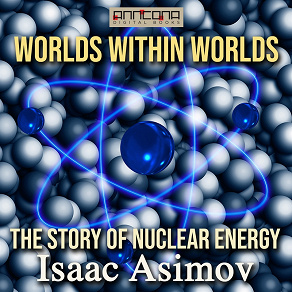 Worlds Within Worlds - The Story of Nuclear Energy

Worlds Within Worlds - The Story of Nuclear Energy by Isaac Asimov explains nuclear physics in a way that can be understood and enjoyed by anyone with an interest in science.

Worlds Within Worlds tells the story of the origins of nuclear physics in terms understandable to an audience with minimal technical background. This is the story of how we discovered radiation, electrons, protons, and finally neutrons. Learn how the first nuclear reactor was built, and how that led to the nuclear bomb. What were the steps through history - the discoveries that built upon one another - from alchemy to chemistry, physics, astronomy, mathematics, and quantum mechanics, that led to our understanding and harnessing nuclear energy?

“Nothing in the history of mankind has opened our eyes to the possibilities of science as has the development of atomic power. In the last 200 years, people have seen the coming of the steam engine, the steamboat, the railroad locomotive, the automobile, the airplane, radio, motion pictures, television, the machine age in general. Yet none of it seemed quite so fantastic, quite so unbelievable, as what man has done since 1939 with the atom ... there seem to be almost no limits to what may lie ahead: inexhaustible energy, new worlds, ever-widening knowledge of the physical universe” - Isaac Asimov.

This is a book on science fact commissioned by the U. S. Energy Research and Development Administration (Office of Public Affairs) and first published in 1972. Read by Blane Aden McKoy. Total Running Time (TRT): 4 hours, 16 min.

Isaac Asimov (1920 – 1992) was an American author and professor of biochemistry at Boston University, best known for his works of science fiction and for his popular science books. Asimov wrote or edited more than 500 books.