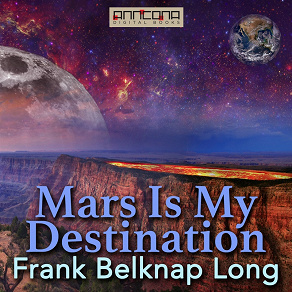 Mars is My Destination

Mars is My Destination is a science fiction novel by Frank Belknap Long.

MARS... Earth's first colony in Space. Men killed for the coveted ticket that allowed them to go there. And, once there, the killing went on....

MARS... Ralph Graham's goal since boyhood—and he was Mars-bound with authority that put the whole planet in his pocket—if he could live long enough to assert it!

MARS... source of incalculable wealth for humanity—and deadly danger for those who tried to get it!

MARS... in Earth's night sky, a symbol of the god of war—in this tense novel of the future, a vivid setting for stirring action!

BUT MARS WAS IN DANGER. There was trouble brewing on Mars—bad trouble. Two giant industrial empires fought for control there, and their struggle imperiled the whole Mars colony. Civil war—atomic civil war second—could break out any second, leaving Earth’s only foothold in space a mass of radioactive rubble.

One man was needed to take charge—one man who could act fast and decisively, brutally if he had to. Ralph Graham got the job. And then the people around him started to die...