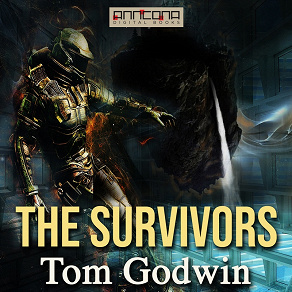 The Survivors (aka Space Prison) is a science fiction novel by Tom Godwin.

”AFTER TWO CENTURIES... The sound came swiftly nearer, rising in pitch and swelling in volume. Then it broke through the clouds, tall and black and beautifully deadly — the Gern battle cruiser, come to seek them out and destroy them.

Humbolt dropped inside the stockade, exulting. For two hundred years his people had been waiting for the chance to fight the mighty Gern Empire… with bows and arrows against blasters and bombs!”

A ship heading from Earth to Athena, a planet 500 light years away, is suddenly attacked by the Gerns, an alien empire in its expansion phase. People aboard are divided by the invaders into Acceptables and Rejects. The Acceptables would become slave labor for the Gerns on Athena, and the Rejects are forced ashore on the nearest 'Earth-like' planet, called Ragnarok. The Gerns say they will return for the Rejects, but the Rejects quickly realise that that isn't going to happen.

Ragnarok has a gravity 1.5 times that of Earth, and is populated by deadly, aggressive creatures and it contains little in the way of usable metal ores. This, combined with a terrible deadly fever that kills in hours, more than decimates the population. The novels follows the stranded humans through several generations as they try to survive there, and their unswerving goal to repay the Gerns for their cruelty.

The Survivors was first published in 1958. The novel was published again by Pyramid Books in 1960 under the title Space Prison. The novel is an expansion of Godwin's story Too Soon to Die which first appeared in the magazine Venture. AUDIO: read by Mark Nelson, reading time 5 hours 55 min. Unabridged full version. Also available as E-Book: ePUB, 54,500 words, average reading time 4 hours, 30 min.