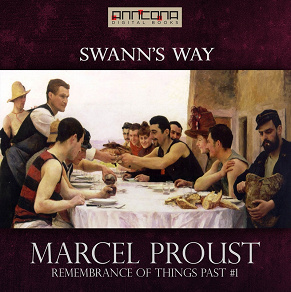 Swann’s Way is the first volume (of 7) in Marcel Proust’s monumental novel  À la recherche du temps perdu (Remembrance of Things Past; or In Search of Lost Time) that was published in seven parts between 1913 and 1927. His most prominent work, it is known both for its length and its theme of involuntary memory, the most famous example being the "episode of the madeleine."

Begun in 1909, Remembrance of Things Past consists of seven volumes totaling around 3,200 pages and featuring more than 2,000 characters. Graham Greene called Proust the "greatest novelist of the 20th century", and W. Somerset Maugham called the novel the "greatest fiction to date". Proust died before he was able to complete his revision of the drafts and proofs of the final volumes, the last three of which were published posthumously and edited by his brother, Robert.

Much of Remembrance of Things Past concerns the vast changes, most particularly the decline of the aristocracy and the rise of the middle classes that occurred in France during the Third Republic and the fin de siècle. Fin de siècle is a French term for end of the century, a term that typically encompasses not only the meaning of the similar English idiom turn of the century, but also both the closing and onset of an era, as the end of the 19th century was felt to be a period of degeneration, but at the same time a period of hope for a new beginning.

Remembrance of Things Past is considered the definitive modern novel by many scholars. It has had a profound effect on subsequent writers such as the Bloomsbury Group. "Oh if I could write like that!" marveled Virginia Woolf in 1922. Literary critic Harold Bloom wrote that Remembrance of Things Past is now "widely recognized as the major novel of the twentieth century." Vladimir Nabokov, in a 1965 interview, named the greatest prose works of the 20th century as, in order, "Joyce's Ulysses, Kafka's The Metamorphosis, Bely's Petersburg, and the first half of Proust's fairy tale Remembrance of Things Past." J. Peder Zane's book The Top Ten: Writers Pick Their Favorite Books, collates 125 "top 10 greatest books of all time" lists by prominent living writers; Remembrance of Things Past is placed eighth. Pulitzer Prize-winning author Michael Chabon has called it his favorite book. According to thegreatestbooks.org, a site which uses algorithms to determine the most well-received books, À la recherche du temps perdu is the second-most critically acclaimed work of fiction ever made, losing only to Ulysses.

Remembrance of Things Past was initially published in seven volumes: