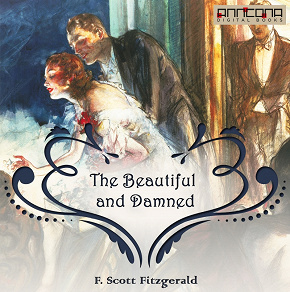 The Beautiful and Damned

by F. Scott Fitzgerald
The Beautiful and Damned, first published in 1922, is F. Scott Fitzgerald's second novel. It portrays the Eastern elite during the Jazz Age, exploring New York café society. As in Fitzgerald's other novels, the characters are complex, especially with respect to marriage and intimacy. The book is believed to be largely based on Fitzgerald's relationship with Zelda Fitzgerald.

The Beautiful and Damned tells the story of Anthony Patch, a 1910s socialite and presumptive heir to a tycoon's fortune, his relationship with his wife, Gloria, his service in the army, and his alcoholism.

The Beautiful and Damned is at once a morality tale, a meditation on love, money and decadence, and a social document. It concerns characters' disproportionate appreciation of their past, which consumes them in the present.

Francis Scott Key Fitzgerald (1896-1940) was an American author of novels and short stories, whose works are the paradigmatic writings of the Jazz Age, a term he coined. He is widely regarded as one of the greatest American writers of the 20th century. Fitzgerald is considered a member of the "Lost Generation" of the 1920s. He finished four novels: This Side of Paradise, The Beautiful and Damned, The Great Gatsby (his most famous), and Tender Is the Night. A fifth, unfinished novel, The Love of the Last Tycoon, was published posthumously. Fitzgerald also wrote many short stories that treat themes of youth and promise along with age and despair.