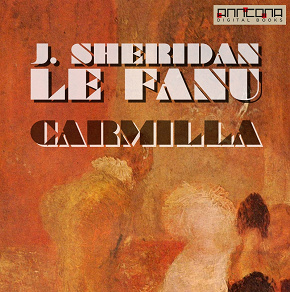 by J. Sheridan Le Fanu
Carmilla is a Gothic novella by Joseph Sheridan Le Fanu. First published in 1872, it tells the story of a young woman's susceptibility to the attentions of a female vampire named Carmilla. Carmilla predates Bram Stoker's Dracula by 25 years.

Carmilla, the title character, is the original prototype for a legion of female and lesbian vampires. Though Le Fanu portrays his vampire's sexuality with the circumspection that one would expect for his time, it is evident that lesbian attraction is the main dynamic between Carmilla and the narrator of the story.

When compared to other literary vampires of the 19th century, Carmilla is a similar product of a culture with strict sexual mores and tangible religious fear. While Carmilla selected exclusively female victims, she only becomes emotionally involved with a few. Carmilla had nocturnal habits, but was not confined to the darkness. She had unearthly beauty, and was able to change her form and to pass through solid walls. Her animal alter ego was a monstrous black cat, not a large dog as in Dracula. She did, however, sleep in a coffin. Carmilla works as a gothic horror story because her victims are portrayed as succumbing to a perverse and unholy temptation that has severe metaphysical consequences for them.

Although Carmilla is a lesser known and far shorter Gothic vampire story than the generally-considered master work of that genre, Dracula, the latter is heavily influenced by Le Fanu's novella.

Carmilla has been adapted to several films, TV-production, radio as well as influenced both comics and music.

Joseph Thomas Sheridan Le Fanu (1814-1873) was an Irish writer of Gothic tales and mystery novels. He was the leading ghost-story writer of the nineteenth century and was central to the development of the genre in the Victorian era. Three of his best known works are “Uncle Silas”, "Carmilla" and “The House by the Churchyard”.

Le Fanu worked in many genres but remains best known for his mystery and horror fiction.  He specialised in tone and effect rather than "shock horror", and liked to leave important details unexplained and mysterious. He avoided overt supernatural effects: in most of his major works, the supernatural is strongly implied but a "natural" explanation is also possible.  Though other writers have since chosen less subtle techniques, Le Fanu's best tales, such as the vampire novella "Carmilla", remain some of the most powerful in the genre. He had enormous influence on one of the 20th century's most important ghost story writers, M. R. James.
Listen to sample
Log in to borrow