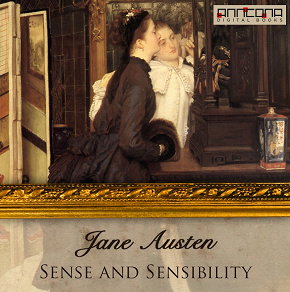 by Jane Austen
Sense and Sensibility is a novel by Jane Austen, and was her first published work when it appeared in 1811 under the pseudonym "A Lady". A work of romantic fiction, better known as a comedy of manners, Sense and Sensibility is set in southwest England, London and Kent between 1792 and 1797, and portrays the life and loves of the Dashwood sisters, Elinor and Marianne.

The novel follows the young ladies to their new home, a meagre cottage on a distant relative's property, where they experience love, romance and heartbreak. The philosophical resolution of the novel is ambiguous: the reader must decide whether sense and sensibility have truly merged.

Jane Austen wrote the first draft of the novel in the form of a novel-in-letters (epistolary form) sometime around 1795 when she was about 19 years old, and gave it the title, Elinor and Marianne. She later changed the form to a narrative and the title to Sense and Sensibility. By changing the title, Austen added "philosophical depth" to what began as a sketch of two characters. The title of the book, and that of her next published novel, Pride and Prejudice (1813), may be suggestive of political conflicts of the 1790s.

The book has been adapted for film, stage and television a number of times.

Jane Austen (1775-1817) was an English novelist whose works of romantic fiction, set among the landed gentry, earned her a place as one of the most widely read writers in English literature. Her realism, biting irony and social commentary have gained her historical importance among scholars and critics.

From 1811 until 1816, with the release of Sense and Sensibility (1811), Pride and Prejudice (1813), Mansfield Park (1814) and Emma (1816), she achieved success as a published writer. She wrote two additional novels, Northanger Abbey and Persuasion, both published posthumously in 1818, and began a third, which was eventually titled Sanditon, but died before completing it.

In 1994, American literary critic Harold Bloom placed Austen among the greatest Western Writers of all time. In a 2002 poll to determine whom the UK public considers the greatest British people in history, Austen was ranked number 70 in the list of the "100 Greatest Britons". In 2003, Austen's Pride and Prejudice came second in the BBC's The Big Read, a national poll to find the "Nation's best-loved book."
Listen to sample
Log in to borrow